We present SizePairs, a new technique to create stable and balanced treemap layouts that visualize values changing over time in hierarchical data. To achieve an overall high-quality result across all time steps in terms of stability and aspect ratio, SizePairs employs a new hierarchical size-based pairing algorithm that recursively pairs two nodes that complement their size changes over time and have similar sizes. SizePairs maximizes the visual quality and stability by optimizing the splitting orientation of each internal node and flipping leaf nodes, if necessary. We also present a comprehensive comparison of SizePairs against the state-of-the-art treemaps developed for visualizing time-dependent data. SizePairs outperforms existing techniques in both visual quality and stability, while being faster than the local moves technique. 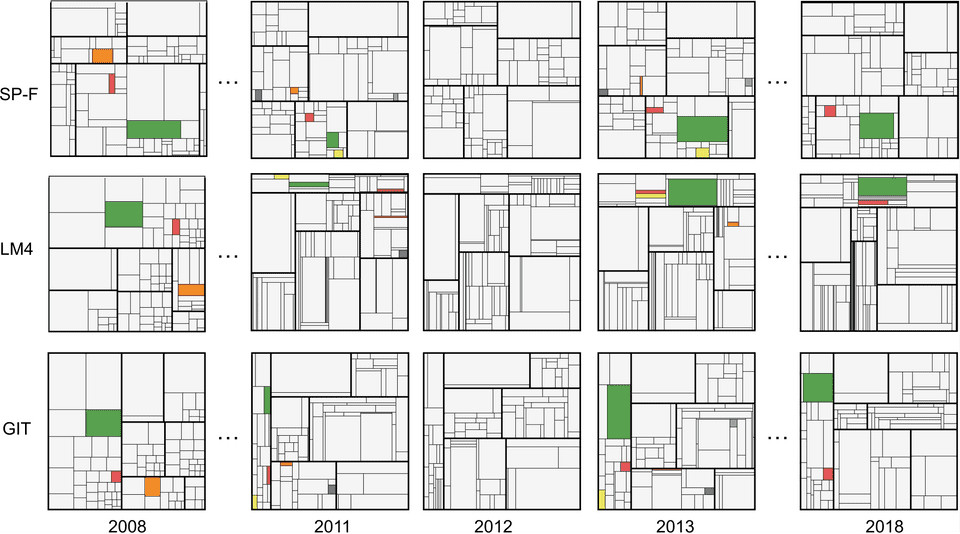 Figure 1: Treemaps for the NetMigration dataset generated by SP-F, LM4, and GIT. Nodes that disappear in 2012 and re-appear in 2013 are placed consistently to their previous locations by SP-F.

Figure 2: Relationship between visual quality (aspect ratio) and short-term stability (corner-travel distance) of different methods for datasets grouped by their characteristics. Note that for aspect ratio, a higher value is better, and for stability, a lower value is better. Therefore, a method is superior to another if its point is closer to the bottom-right corner.

Figure 3: Superiority of SP(F) over LM and GIT. Green cells indicate SP(F) outperforms GIT or LM on average in terms of corner-travel distance and aspect ratio for datasets with a certain feature combination. Gray means there is a trade-off (e.g., aspect ratio is better but stability is worse). Red means our method was inferior in terms of both metrics.